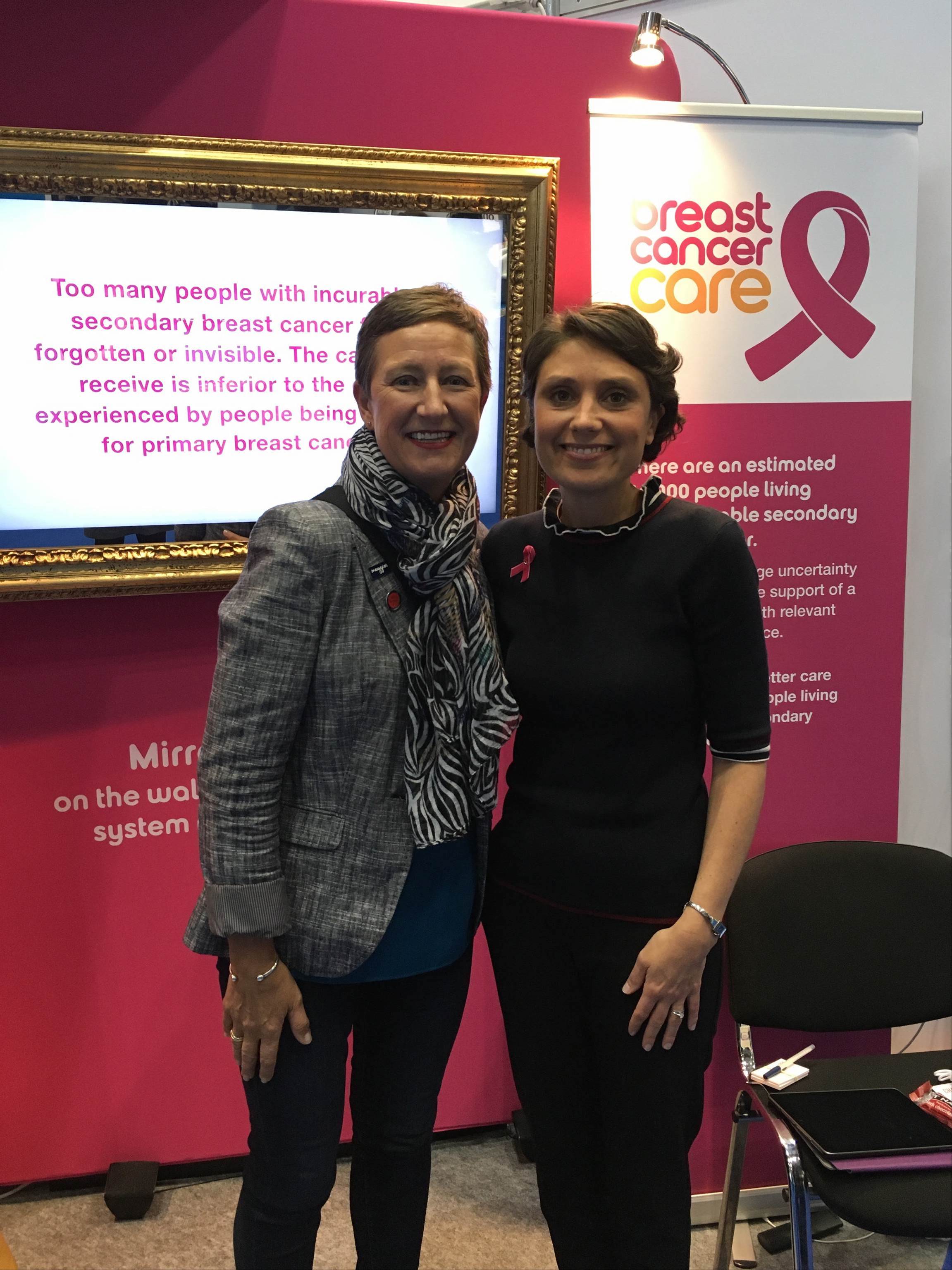 Anger sometimes comes in waves, but I try to take my mind off things with work, outdoor activities and of course day to day life with my husband and two children helps immensely. Switching off from the fact I have incurable secondary breast cancer is no easy task and I’ve now been living with Secondary Breast Cancer (SBC) for six years. When I began treatment for SBC in 2014 (7 years after my primary diagnosis), I looked at myself in the mirror without any hair and thought “is this the last memory that my children, husband and friends will have?” I hated being bald and to date I have lost my hair four times.

In my blog on abcdiagnosis I have written many times about the surgery I had on my sternum and aside from the extremely invasive surgery, the fear surrounding my diagnosis and the impact on me and my family, the thing that stands out the most for me is the feelings at that time about my hair. I remember as if it were yesterday I had a break from the chemotherapy to prepare me for surgery and my hair started to grow back however I was aware that following surgery, I had three more sessions to endure and I did not want to lose my regrowth. It was around November and I did not want to be bald for Christmas. I wanted to look like mummy to my children and I wanted to feel like me.

So, I decided to have scalp cooling. Now, I am a very strong person with a high pain threshold however I must admit, ‘uncomfortable’ is an understatement.  I took paracetamol and ibuprofen beforehand and this helped.  Around ten minutes in the pain eased and became tolerable. In addition to the cold cap I endured the cold gloves and sock combo to try to reduce the impact of peripheral neuropathy to my hands and feet from the abraxane chemotherapy.  A ‘triple whammy’ of cold and pain inducing treatments you could say. In order to combat the cold, I was covered in blankets and ensured my hot water bottle was always close by.

I only had the cold cap another three times to complete my remaining course of chemotherapy and the pain and preparations were worth it.  I felt happier in myself that I didn’t have to wear a wig or a headscarf (I would never go out without something covering my baldness). Yes, everyone is different, but I just didn’t want anyone to know about it.  I didn’t want the stares or the head tilt or the questions (sometimes you get them from strangers).  My hair has always been a huge part of me.  I felt good when my hair was nice but when I was bald, I would walk past a mirror and did not recognize the reflection staring back.  I had morphed easily into the men in my family. Dad had been bald forever and then my brother started losing his hair at a young age so always had it shaved short.  I didn’t feel feminine at all. I felt I was just ‘a thing’.

And it wasn’t just that, the thought of being bald and having secondary breast cancer was something I could not comprehend.  I’ve not really talked to anyone about this until very recently when the same point came up when talking with my friend Jo Myatt.  She explained she was thinking about refusing treatment due to the fact it would again result in hair loss.  She explained how when she was diagnosed with primary breast cancer and lost her hair it was devastating, but she was told the treatment was to prevent a recurrence and she knew it would grow back again.  With SBC however she explained how she was aware the treatment may not work, or if it did work, may only work for a short period.  She explained how she wanted to live life looking like herself but also wanted to die looking like herself.  You may think you could only understand this if you were in the same position as us, however if you really think about it, its not a difficult thing to understand.  It’s not about vanity, its about confidence and about control.  When you have cancer, the control is the first thing to go.  Choice in how you live and how you die gives an element of that control back.

Jo asked if she could cold cap with her treatment however was told by her well known North West cancer hospital that she was unable to have scalp cooling “because the infusion is only 15 minutes” and she would have had to wear the cap for 30 minutes before the infusion and 90 minutes after the infusion.  Other hospitals outside of hers uses the cold cap for the same treatment.  She was told by the hospital they do not use it as it does not work with the drug she would be prescribed, however what was concluded following a discussion with the company who make the cold caps is that it appeared to be more about the inconvenience of the treatment time increasing and the resources being unavailable to support this.

My question is, how can it be acceptable to almost encourage someone to refuse life extending treatment because they can’t schedule something in that makes them more able to cope.  How can denying an incurable patient choice be acceptable? I am a realist; I understand the time and budgetary constraints placed on the NHS but what I do not understand is how discrimination can exist so obviously within two groups and that this can then also be acceptable.  As I’ve said above, cancer removes control therefore, ensuring patients have the choice when choice is attainable and available is fundamental to their wellbeing.  She/we know primary patients get this opportunity with chemotherapy treatment of this kind and to be denied this makes her and those in a similar situation feel like second class citizens.  Is it viewed as a waste of time?  A waste of resources?  Is it because we will die anyway?  What does that say about the society in which we live when people, many of them young women are denied that choice?

Jo said that “the biggest thing apart from looking like me when I’m living and dying is control.  I can choose who to share my diagnosis with but when you are bald, people think they have a right to comment and to enquire.  The discussions about diagnosis and prognosis become exhausting and people think that they have a right to ask.  There is a significant lack of control with cancer and this is another example of the detrimental impact when choice is refused.”

Its not a selfish thing just as it’s not about vanity, choice is a hugely important part of dying.  How you want to be remembered?  I may be ill or bloated from steroids, but I want to be recognised as me and have my hair which is a big part of me.  Bald says cancer.

So, this is request to anyone who is involved either in the role as a clinician, nurse or researcher.  Please understand that control and choice is as fundamental and as important as a cancer patient having access to life extending treatments.

The drugs I’m currently prescribed (perjeta, Herceptin, denusamab and prostap 3 monthly injections and letrozole) are (hopefully) doing their job and controlling my cancer but they also give me a really good quality of life.  Apart from the fact I am able to live well on these drugs, they do not cause hair loss therefore unless I choose to tell people my diagnosis, my diagnosis is mine.

Primary or secondary, curable, incurable, we all deserve to be able to live well with cancer and live in a way WE choose.