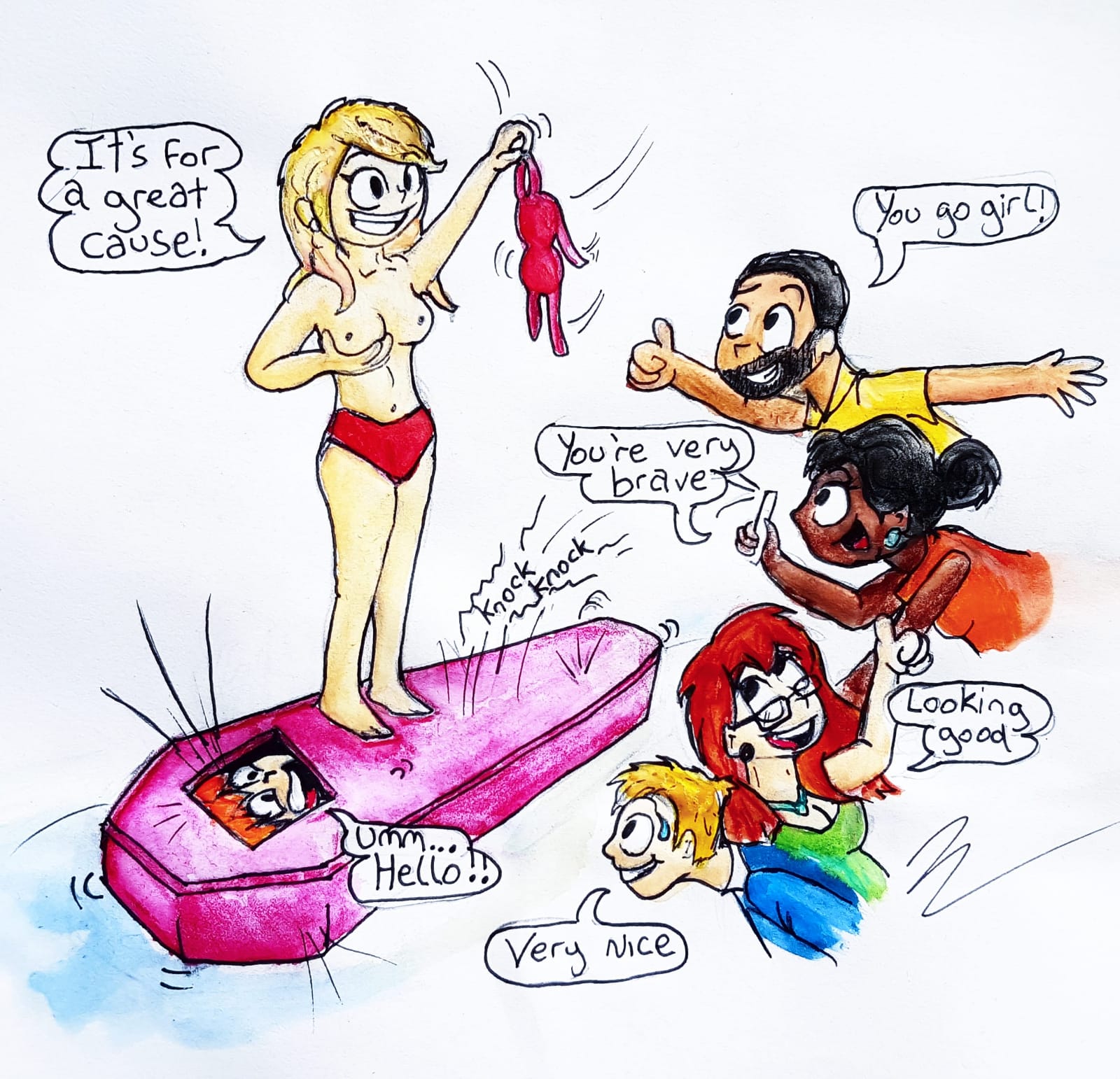 We went quiet, because the majority of us working on the #IAmThe31 campaign are undergoing continued treatment for Secondary Breast Cancer, are awaiting scan results, trying to work, and exhausted ourselves trying to ‘shout into the pink positivity’ on Secondary Breast Cancer Awareness Day on Tuesday (and the fact that #NoBraDay was trending for most of that day, allegedly a breast cancer awareness campaign, but many on social media did not seem aware of this – led to this fantastic cartoon by MetUPUK member Tassia Haines).

Even amongst secondary cancer patients, there are a range of different attitudes towards the breast cancer awareness campaigns undertaken both by the big charities, and the marketing efforts of other organisations. Generally, however, there is a feeling that the focus on ‘pink positivity’ and the sexualisation of breast cancer in particular, is problematic. In one way, pink is recognisable and it can get people on board… and any money raised that can improve our lives is appreciated, but it does make some of us feel rather like we are a ‘dirty little secret’ that people (especially primary patients) don’t want to know about… we are the nightmare that they don’t want to see!

When we speak out about the realities of our lives – in recognition of how short we expect them to be, and how the treatments impact our lives – we’re not trying to be negative, but to be realistic, and impress on people the need for speed for new treatments and policy change. Typically companies looking to align with charitable campaigns are looking for ‘good news stories’, so pink, fun, and all that is ‘an easy sell’. Secondary cancer, and other diseases that kill, are not so appealing for companies to align with…

MetUpUK has been growing over this summer, seeking to move beyond core membership of secondary breast cancer patients, to involve friends and families of those dealing with metastatic breast cancer. We are also happy that primary patients are getting involved: all should be much more educated and informed (and not so terrified that any symptoms are ignored) about secondary breast cancer – and be aware of the red flags that indicate a trip to see your medical team is needed!

We haven’t done a formal assessment of our #IAmThe31 campaign, but we’ll be looking at what  we can learn from what we did this year, in a campaign swiftly put together with love, care and vision (especially by fabulous MetUpUK member Emma Fisher), but no budget!

So we can see that we’ve generated a great deal of awareness amongst our networks online, but we’re keen to get the conversation about metastatic breast cancer into policy conversations (Bex was pleased to see her MP supporting the campaign), see the big breast cancer charities taking more action around secondary cancer, see the media pick up on our stories, and see our needs taken with enough seriousness to see better research, better treatments, and better policies to improve both the length, and quality, of our lives. Many of us in MetUPUK are aware that we may be fighting for things that we won’t personally benefit from, but we are keen that others do not go through the experiences that we have.