Skip to content
Home > Darker Side of Pink > Phillipa Hetherington 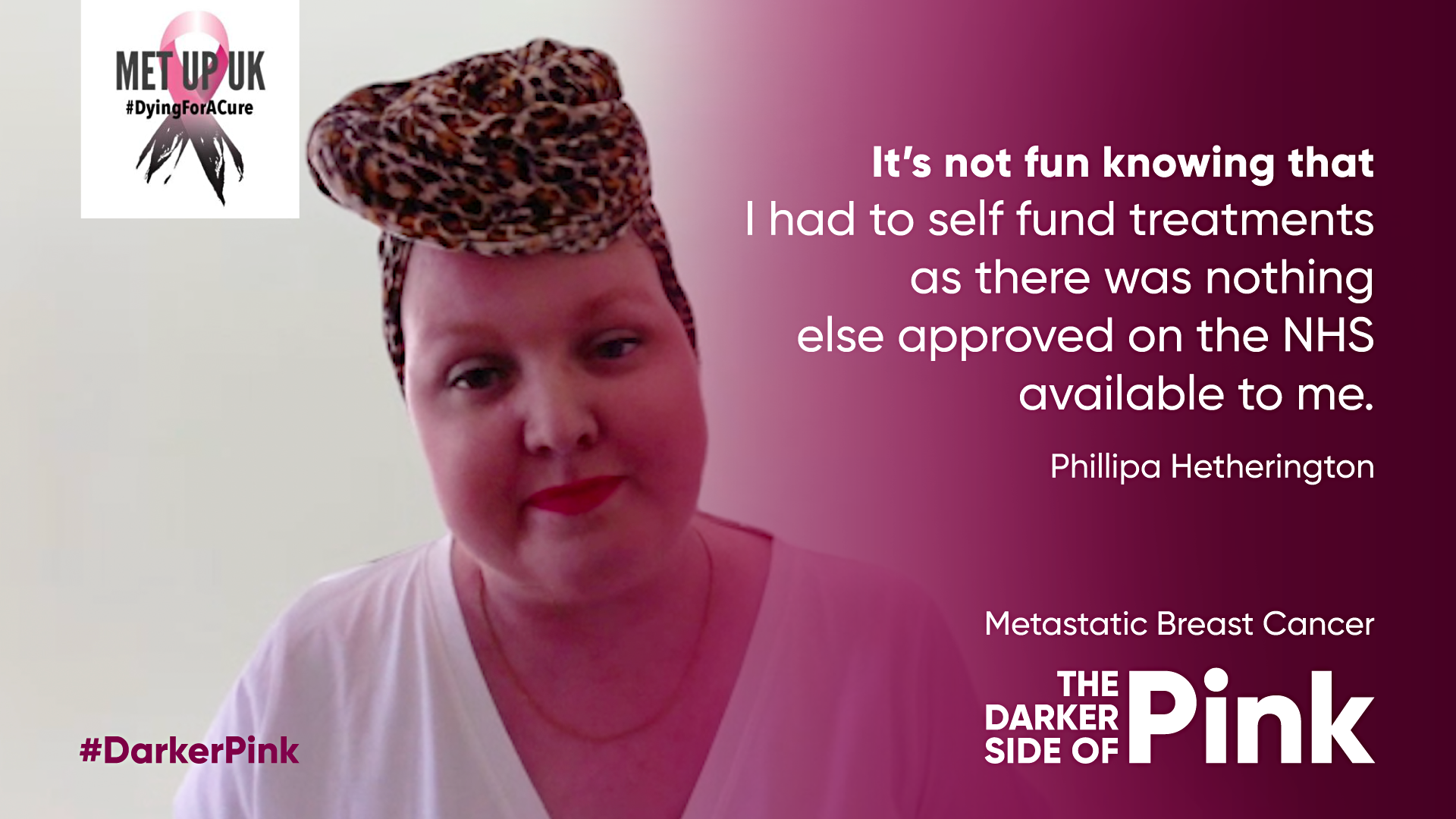 Diagnosis: Primary BC diagnosed March 2019; ER+ PR+ and Her2 Negative. There was an initial question mark that I might have inflammatory breast cancer but a punch biopsy showed no cancer in the skin. I still consider it a possibility.

In May 2020 a chest x-ray looking for a possible pulmonary embolism picked up a nodule on my lung; a surveillance scan six months later found that the nodule had grown and multiplied and I now had secondary breast cancer. This was confirmed in November 2020.

Age at Diagnosis: 35 at first diagnosis; 37 at secondary

Hi I’m Philippa, I live in Walthamstow, London with my partner Alessandro.

I’m originally from Australia and have lived in the US and Russia before I moved here. In my regular life, I’m a university lecturer in Russian history, a job I love dearly.

I found my breast cancer by accident; I was getting out of the shower one day and saw a patch of red across one breast. Thinking it was a rash, I gave it a poke and felt that the breast was hard under there. Eventually, I realised there was an area of about 5cm ‘thickness’ in the breast and took myself off to the GP. I checked my breasts every month but obviously didn’t do it right because I had never felt this before. I was diagnosed quickly, and the whole thing was a huge shock of course.

I have no family history of breast cancer or of cancer at a young age. Though my tumour was high grade (3) and large, I was told that everything else was in my favour and I was ‘low risk’ for recurrence – no lymph spread, highly hormone-positive, decent response to chemo, radical mastectomy for surgery.

Just six months after the end of treatment for my primary, I presented at A&E with chest pains (I was worried about Covid). They found nothing to explain the pains (probably heartburn…) but they did find a small nodule on my lung. Given my cancer history, they told me this needed to be monitored. I left the hospital in shock, eyes blurred from tears, but when I spoke to my oncologist a few days later she assured me it was just a ‘reactive lymph node.’ At my insistence, we rescanned at 6 months to check. Well, this reactive lymph node had grown and multiplied and was now highly suspicious for metastatic cancer.

I just remember my oncologist starting with ‘I’m sorry to tell you this over the phone…’ and I broke down ‘I’m dying, aren’t I?’ Since that day in November things have lurched from crisis to crisis. A biopsy revealed I was no longer hormone-positive (and therefore the ‘gentler’ hormone medications would not work on me) but now Triple Negative, the hardest, the cruelest form of the disease. IV chemo is essentially the only treatment for Triple Negative and just getting through treatments is a struggle. In April we found out that the cancer had spread to my brain – innumerable small mets.

I had whole brain radiotherapy to zap the lesions. I will need brain scans every 8 weeks for the rest of my life to try to stay on top of any new tumours. The first chemotherapy I was on. – gem/carbo – also stopped working and I switched treatments to paclitaxel and Avastin – I pay out of pocket for the latter.

Recently I’ve spent 16 days in the hospital with a rare type of pneumonia common among the immunosuppressed, and my body feels battered.

Why you wanted to be involved with the MetUpUK campaign
There is too little focus on metastatic breast cancer and too much on ‘prevention’ as a ‘cure.’ Unfortunately not all breast cancer can be prevented and some is so aggressive that no early detection will save the patient. We need to demand drug companies give us access to the newest drugs like ACTUP did with AIDS in the 80s and 90s.