And so, this October 13th , MetUpUk are bringing you their #IAmThe31 campaign to raise awareness of some of the issues that people with SBC face…….. 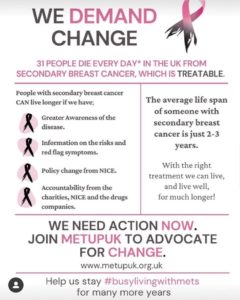 A webpage includes over 60 people who are living with the disease and shares a little bit about them and their diagnosis.

The aim of the campaign is to put faces to the numbers, showing that the 31 people who die daily are real people with real lives, families, and friends who will be devastated by their death.

MetUpUk demands change and they need your help to spread the word of secondary breast cancer.

MetUpUk would like everyone who sees the campaign to aim to share it with at least 31 people.

We’d like as many as possible to visit the website and read about some of the `31’s’ living with this terminal illness.

END
MetUpUk is a volunteer-run breast cancer activism and advocacy group, campaigning for better treatments and more awareness for those with secondary breast cancer.